And the cat came back…(August 6 column) 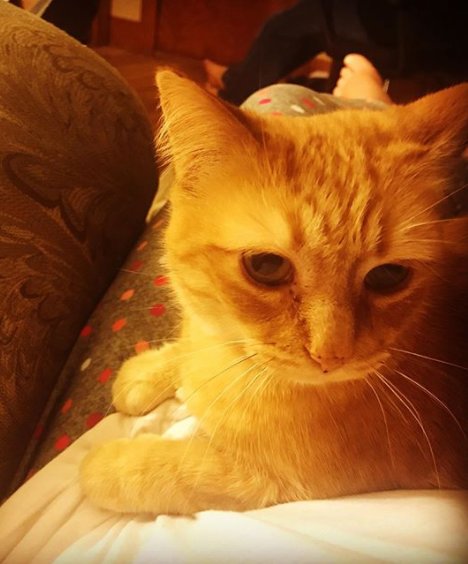 In honor of International Cat day, I bring you a noisy, bossy, and fickle feline.

This is Flannery O’Connor. She is an orange tabby who adopted us in September, 2014, just after daughter Caitlyn left for college.

“You guys got this cat to replace me, didn’t you?” Caitlyn asked at the time. But we did no such thing. We probably wouldn’t have done it to Gryffin, our aged black Labrador (now gone over the Rainbow Bridge). But Flannery, probably just a few months old, sat firmly on our porch rail and meowed.

“Where did she come from?” Bryan asked.

“She was probably born to a stray.”

At this point, we lived in the Wonder Whip in Fostoria, between Spencer and Milford. Fostoria was a town with a city hall and park, and the elevator, and strange things happened. One night I was sitting out front and an entire gaze of raccoons ran by, some on the perimeter leaving a whisk of movement breeze by my bare feet.

Flannery didn’t leave in search of a more hospitable household, or she struck out in her quest for food delivery.

“Okay, you can at least bring her some water, but don’t get too affectionate. We can’t get a cat right now,” I told Bryan.

A couple of days later, I saw a can of tuna, slightly used, beside the water dish.

“What is this?” I asked. We’re not keeping her.

My friends had the giggles. “You have a cat.”

“We’re not getting a cat,” I replied firmly.

I snapped a photo and put up signs at the post office and the Cenex, in hopes the cat had a family who was looking for her. I had a feeling she didn’t, but I decided to give it a week, even ten days, because even a farm cat might have been a treasured pet, albeit one with attitude, of a rural child.

“You should name her,” Bryan said.

More friends weighed in as the predicament continued.

“Awww….look at those little eyes.”

By the time my birthday rolled around in mid-September, Flannery had moved indoors.

She’s noisy, messy and somewhat expensive, prefers to perch and stare at us in judgment most of the time she’s awake. She startles me at 3 a.m. jumping from the window sill to my midsection on the bed. Her favorite place is where she’s not supposed to be - -on top of my tall dresser or nuzzling my sweaters on my closet shelf.

The boys are crazy about her, and she grew on me, eventually. When it’s cold and she wants to cuddle, I can deal with that.

This summer, Flannery is negotiating her relationship with our new dogs, Daisy Buchanan and Alexandra Hamilton. Flannery and Daisy, both around seven years old, have calm, gentle sniffing interactions and the occasional, tentative cuddle. Alexandra, a three-month-old puppy, chases, gives sloppy kisses, and will bark excitedly after dropping her ball in front of Flannery, having no concept that Flannery does not want to play with her. Flannery, however, will jump into my recliner when I am spending quality time with Alexandra, and tentatively step close to see what will happen. Flannery was a dog-loving cat with Gryffin, who was an exhausted 12-year-old when Flannery came along, and she may develop a strong friendship with the new dogs when they all settle in. It has only been a month.

Happy International Cat Day to all the cat owners out there, to Morris and Sylvester, Garfield and Smudge, the cat in the meme who smirks from his dinner while the upset lady yells at him, Tom and the Aristocats, and every cool cat.

Until Then poignant, inspiring

Please Join Us as We Mask Up for Health

Father's Day Message from the Mayor