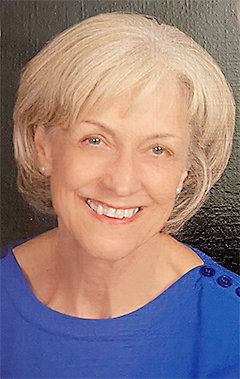 CORALVILLE — Diagnosed with early-onset Alzheimer’s in January, 2020, Barbara Ann Cook Aanonson succumbed to that disease on October, 11th, 2021 at Keystone Place at Forevergreen Road, North Liberty, Iowa.
Barbara Ann Cook was born in Atlantic, Iowa, on March, 7, 1947. The first child of Glain Cook and Eleanor (Rasmussen) Cook, she was baptized into Christ on June 8, 1947, at St. John Lutheran Church, Exira, Iowa. Barbara was confirmed in this faith at Good Shepherd Lutheran Church, Veradale, Washington (now Spokane Valley) on December 15, 1963. She graduated from Central Valley High School, Veradale, Washington in 1965. Barbara attended Grand View College, Des Moines, Iowa and graduated with a B.S. in elementary education in 1969 from Dana College, Blair, Nebraska, where she met David Aanonson. They were married on March 22, 1969 at Good Shepherd Lutheran Church, Veradale, Washington. While in college she was active in many musical activities, including Danish folk dancing. She joined David, who was in the U.S. Air Force, at San Vito Dei Normanni Air Station, Italy and she taught at Brindisi Dependent School. When David was transferred to Elmendorf Air Force Base, Anchorage, Alaska, Barb drove with him up the Alaska Highway during the first week of December (-65 F). In Anchorage, she taught at the Anchorage Montessori School System. In 1972, Barb and Dave moved to St. Paul Minnesota, where Barb began working at the Linnea Home. In 1974, they moved to Regina, Saskatchewan Canada, returning to St. Paul in 1975. In succession they moved to Chariton/Corydon, Iowa; Davenport, Iowa; Stanton, Iowa; Lawrence, KS; and finally, to Coralville, Iowa in 1991. David served as a pastor at each stop. Barb was the consummate pastor’s wife, serving where there was a need. Along the way she taught piano lessons, worked at Sallie Mae in Lawrence, and finally for twenty years at Grant Wood Area Education Agency in Coralville. Most importantly Barbara was what she always had wanted to be -- a wife and a mother, two roles in which she was highly successful. She taught all her children and grandchildren to love music. They all learned to play one or more musical instruments. Her home was always filled with music. Barb was a fantastic cook. She enjoyed cooking and entertaining her many friends. She liked to read, listen to classical music and attend her children’s and grandchildren’s school activities. Barb was a loving, kind, soft-spoken and empathetic person who valued friendships highly. She was always willing to help where she was needed.
Barb is survived by her husband David of Coralville; her three children: Rachel (Eric) Dickinson of Vinton, Iowa; Erik (Wendy) of Bondurant, Iowa; and Sarah (Greg Laffey) Aanonson of North Liberty, Iowa; her seven grandchildren: Emma Dickinson, Jaycie Aanonson, Brant Dickinson, Natalie Aanonson, Zachary Dickinson, Dylan Lorenzen, and Viola Laffey; her special friend, Sandy; her sister Bonnie Baldwin of Culdesac, Idaho; and by her three brothers, Steven, Curtis, and Kevin of Spokane Valley, Washington. She was preceded in death by her parents and her parents-in-law, Eldon and Dorothy Aanonson.
Barbara’s funeral will be at Christ the King Lutheran Church, Iowa City, Iowa, on Sunday, October 17, at 2:00 pm. The family will receive visitors at the church from 5:00-8:00pm on Saturday October 16th and one hour prior to the services on Sunday. Burial will be at Wallingford, Iowa, Cemetery on Monday, October 18th, at 1:00 pm. To share a thought, memory or condolence please visit the funeral home website @ www.gayandciha. The services will also be livestreamed through her website page at the funeral home.
In lieu of flowers memorials may be made to the Alzheimer’s Association, Special Olympics (in honor of Barb’s friend Sandy) or to either Gloria Dei Lutheran Church or Christ the King Lutheran Church.