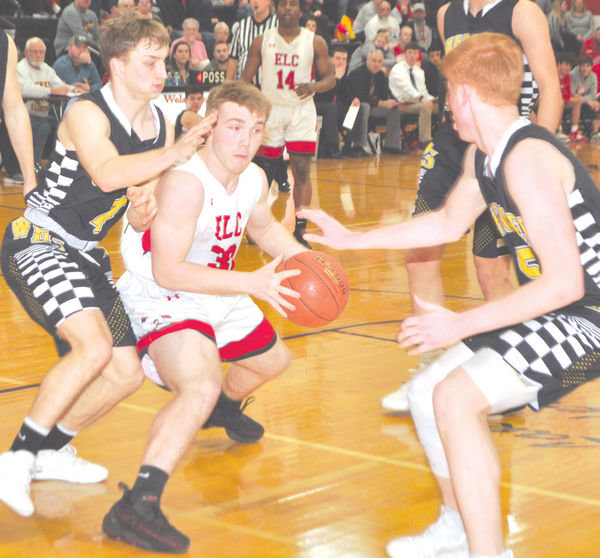 The Cherokee defense collapses on ELC’s Weston Shasteen during play on Tuesday in Estherville. Photo by David Swartz
Posted Wednesday, January 29, 2020 12:00 am

The Estherville Lincoln Central boys had something to prove when Cherokee came to town on Tuesday.

The Midgets had lost the first meeting against the Braves by 42 points, 67-25.

ELC put up a better battle in the rematch, but Cherokee was still too much as the visitors won 57-32.

The Midgets had opportunities, but it was a night where the shots just didn't fall.

Also, Cherokee had the difference-maker in 6-7 Ryan Hurd, who both ran the point and posted up. He finished with 22 points on 8-of-9 shooting, including a couple slam-dunks, while going 6-of-9 from the free throw line. He also had 11 rebounds, three assists and a pair of blocked shots.

The Midgets started well. Octavious Piercy-Maze scored ELC's first seven points on a layup, two free throws and a 3-ointer as ELC led 7-3. ELC still led 9-5 after a putback by Kolin Richardson, but the Braves' ended the quarter on a 9-4 run to lead 14-13.

The pace slowed in the third quarter with both teams struggling to score. However, the Braves scored the first six points and would never trail again. Two baskets by Adrian Vaughn toward the end of the half had ELC within four, 24-20, but Cherokee again scored the final points to lead 28-20 at the break. A quick layup and 3-pointer by Cherokee's Brayden Farver push Cherokee's lead to double digits, 33-20. ELC had one more rally with an Izaak Sander 3-pointer cutting the lead back to seven, 34-27. Again Cherokee responded with a min-run and that allowed them to lead 43-30 entering the final period.

Piercy-Maze led ELC with nine points, Vaughn and Sander each had eight, Matt Christensen had five, and Kolin Richardson had two.

ELC (6-8 overall, 0-7 in the Lakes Conference) hosts Spirit Lake on Friday and travels to Spencer for a make-up game on Saturday.

In junior varsity play, ELC lost 44-36 to Cherokee. Blake Ingvall led the Midgets with 17 points, Tristan Howard and Carson Madsen each had five, Gary Gardner had four, Jack Jensen had three, and Grant Love had two.