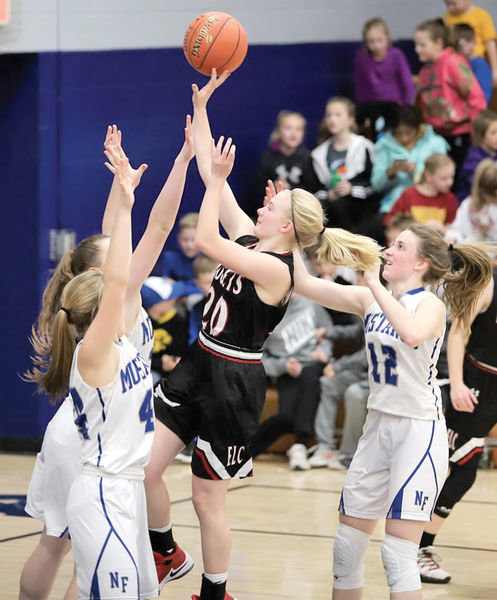 ELC’s Amara Heinrichs (20) sends up a floater in the lane against the Newell-Fonda defense on Thursday. Photo by Marcy Sander
Posted Sunday, January 19, 2020 12:00 am

NEWELL - Class 1A No. 2 Newell-Fonda took it to Estherville Lincoln Central early and often, as the Mustangs defeated the Migdets 67-56 on Thursday.

The defending 1A state champions led 5-0 before a basket by ELC's Amara Heinrichs. The teams traded baskets, but ELC trailed by five, 14-9, after Jaydan Nitchals hit her first 3 of the game. However, the Mustangs scored the final five points of the period to lead 18-9.

Newell-Fonda continued to pull away in the second period, taking a 39-19 lead at the break.

ELC played toe-to-toe with the hosts in the third quarter, but couldn't gain ground and trailed 51-29 entering the final frame.

"Newell-Fonda has been doing things Coach (Dick) Jungers' way for a number of years," said ELC coach Don Martindale. "We like to play fast, but they made us play faster. We can't simulate the pace that they play."

Martindale said Newell-Fonda showed areas that ELC can improve on.

"They showed us what cutting hard to the basket is," he said. "Their execution with back screens and the speed that they cut-we learned a lot from this game."

Despite the struggles, Martindale was proud of the way his team played the second half, with Newell-Fonda winning the final two quarters by just two points.

Nitchals finished with a team-high 19 points for ELC after just three points in the first half. Kaitlyn Tendal finished with 18 points while Jordyn Stokes had four and Amara Heinrichs and Jadynn Moore each had two points.

Nitchals had seven rebounds while Tendal had six. Stokes had two assists.

Bailey Sievers led Newell-Fonda with 15 points while Ellie Lago had 13 and Megan Morenz had 10.

Unofficially, ELC had 25 turnovers to the Mustangs' 14. Newell-Fonda also had a 39-36 rebound advantage with a 16-6 advantage on steals.

ELC (9-3 overall) will travel to Hull to face Western Christian on Tuesday.