E’Hawks able to hold off Midgets 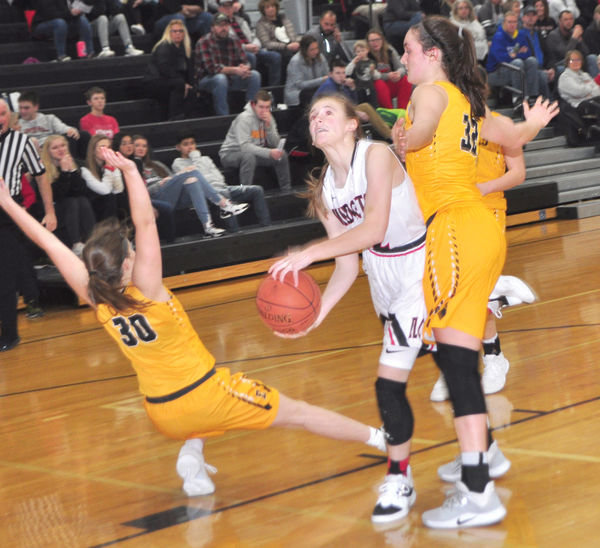 ELC’s Kaitlyn Tendal takes the contact as she drives inside the Emmetsburg defense on Thursday. Photo by David Swartz
Posted Monday, January 27, 2020 12:00 am

Yes, the E'Hawk defense had its effects, but even on the open looks, the Midgets' shot fell short and they fell 56-41 on Thursday.

"We have practices a lot this week and it showed defensively," said ELC coach Don Martindale. "Our defensive rotation wasn't there and foul trouble killed us."

"ELC got has close as two points, 13-11, after a steal by Amara Heinrichs and a pass ahead to Jadynn Moore for a layup. However a 3pointer by the E'Hawks Raven Brown at the first quarter gave the visitors a 19-14 advantage.

Emmetsburg outscored ELC 11-4 in the second quarter to pull away for a 30-18 half-time lead.

In the third quarter, the E'Hawks Molly Schany scored the first seven points for the visitor's biggest lead, 37-21.

ELC scored the next seven points, as part of a 10-0 ELC run, which included a pair of 3-pointers by Jaydan Nitchals, that cut the deficit to 37-28.

However it was Schany's night, as she immediately answered with a 3-pointer as she hit her 1,000th career point. ELC could never get the lead back to single digits. Emmetsburg led 47-34 to start the final frame.

Nitchals led ELC with 10 points while Moore and Jordyn Stokes each had eight. Kaitlyn Tendal had six points, Adrienne Rosfjord had four, Gabby Paul had three and Heinrichs had two.

ELC (9-5 overall) will try to get back on track Tuesday, but it won't be easy as Class 3A No. 15 Cherokee comes to town.