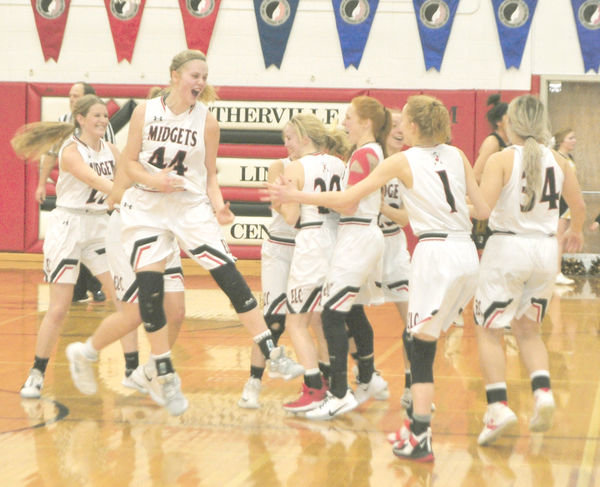 Estherville Lincoln Central’s Jaydan Nitchals (44) leaps in joy in celebrating with her teammates after the Midgets avenged an earlier season loss to Cherokee with a 59-49 victory on Tuesday in Estherville. Photo by David Swartz 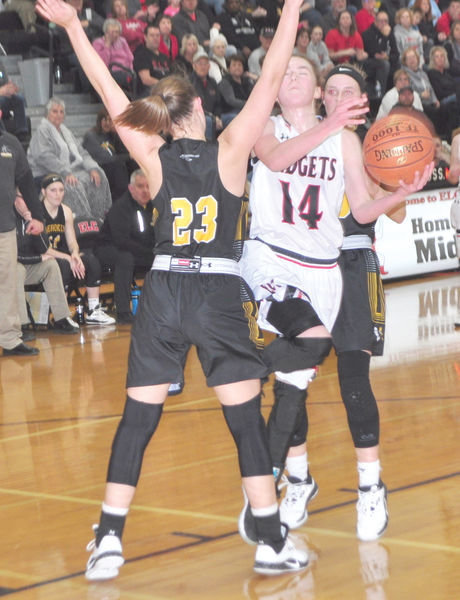 ELC’s Jordyn Stokes (14) is ready for the contact as she drives to the basket against Cherokee. Photo by David Swartz
Previous Next
Posted Wednesday, January 29, 2020 12:00 am

"I'm really proud of the kids and how they executed the game plan," said ELC coach Don Martindale. "We played four good quarters and we were so unselfish. We did the things we needed to beat a very good team."

ELC switched up its defense with a strong 2-3 zone to disrupt the visitors. The Midgets also made a conscientious effort to limit the Braves' fast break opportunities.

"I'm pleased with how active our hands were-we had a lot of deflections," said Martindale.

Cherokee is the sixth highest scoring team in the state in all classes averaging 68.7 points per game and the Class 3A leader in scoring points.

"We held them to 19 points below their average, which is kind of impressive from our bunch," said Martindale.

ELC got off to a strong start, jumping out to an8-1 lead. However, Cherokee stormed back and led 15-12 after the first quarter. In the second quarter, ELC tied the game twice before an Amara Heinrichs' 3 connected to give ELC a 24-23 advantage. After a basket by the Braves, Kaitlyn Tendal connected from long range as ELC led 27-25 with a minute left in the half. Tendal added a free throw in the final minute, as ELC led 28-25 at the break.

The Midgets would not trail in the second half. Jaydan Nitchals and Tendal combined to start a 7-0 run to start the third quarter, as ELC led 35-26. ELC still led 39-30 after Jadynn Moore's lone basket in the game, but Cherokee scored the final six points to cut the deficit to three, 39-36, to start the final period.

The Braves' JeMae Nichols scored the first basket of the final period to cut the deficit to one, but Tendal answered with her second d3-pointer and the Braves would never get closer than three points.

ELC led 54-49 in the final minute, but the Braves didn't score again as Jordyn Stokes, Tendal and Nitchals completed the scoring for the game.

Tendal finished with 24 points while Nitchals had 19, Heinrichs had seven, and Moore had two.

Nichols led Cherokee with 24 points while Tegan Slaughter had 11.

ELC (10-5 overall, 4-2 in the Lakes Conference) hosts Spirit Lake on Friday before traveling to Spencer on Saturday. Saturday's game starts at 3:30 p.m.