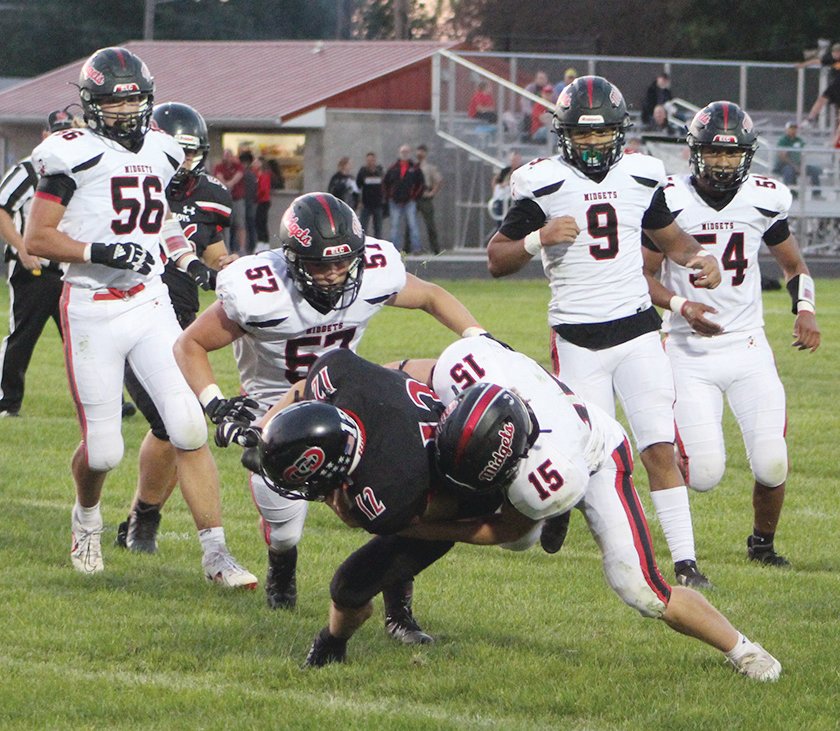 Although he had plenty of backup, ELC senior Seth Busch (15) makes the stop by himself on this play against Clarion-Goldfield-Dows on Friday. Other ELC defenders ready to assist are Jack Jensen (56), Zander Snyder, (57), Zavion McMurran (9), and Alex Pena (54).
Photo by David Swartz 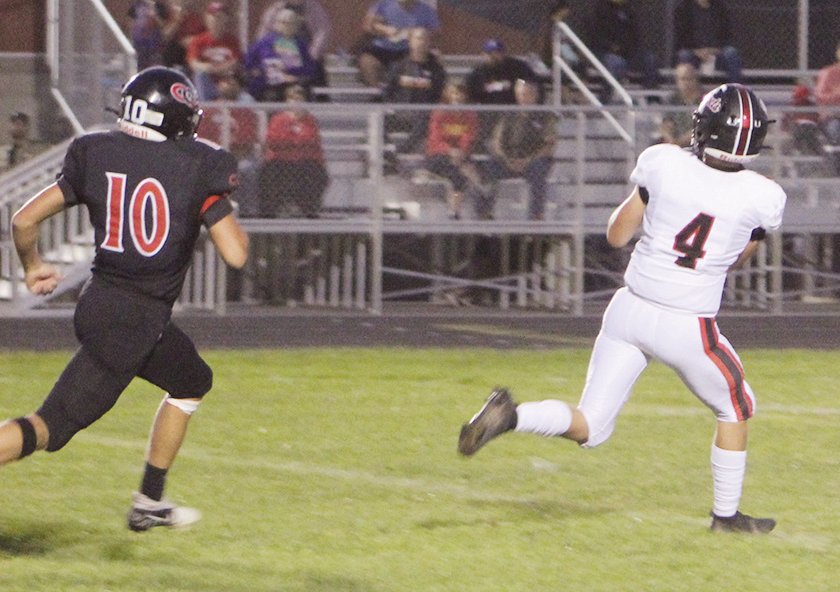 ELC’s Owen Larson gets past Clarion-Goldfield-Dows’ Cale Kirstein for this ELC touchdown in the second quarter on Friday.
Photo by David Swartz
Previous Next
Posted Monday, September 27, 2021 10:59 am
By David Swartz - Managing Editor

While Class 2A No. 4 Estherville Lincoln Central had a few setbacks in the first half against Clarion-Goldfield-Dows, the Midgets regrouped in the second half on the way to a 52-21 victory last Friday.
Five different ELC players scored touchdowns in the contest, as ELC out-gained the Cowboys 477 to 289.
Quarterback Ryan Schiltz finished 10-of-15 passing for 271 yards and three touchdowns. However, he also threw three interceptions. On the ground, Zavion McMurran scored twice while Schiltz and Seth Busch each ran in a touchdown.
The host Cowboys started the game with the ball and faced fourth and 13 after three plays. They fumbled the snap on the punt attempt. McMurran picked up the loose ball and advanced it to the CGD 19-yard line.
A run by Daryl Jensen gave ELC a first-and-goal at the 9. However ELC moved back after a false start. On the next play, Schiltz connected with Owen Larson, who spun out of a couple tackles to get in the end zone. However, the touchdown was called back due to a holding penalty
Facing first and goal from the 22-yard didn’t faze the Midgets one bit though. McMurran promptly ran the ball around the left side to score on the play. ELC failed on the two-point conversion, but led 6-0 at the 9:14 mark of the first quarter.
After stopping CGD again, ELC’s next drive started at the Midget 32. ELC drove across the midfield, when Schiltz again attempted to connect with Larson. However, the pass was intercepted at the 3-yard line by the Cowboy defense with Larson immediately making the stop.
CGD took the momentum and finally put a drive together. The Cowboys’ drive was helped by a pass from Preston Gardner to Coady Olson, who had got behind the ELC defense. Schiltz covering on the play, caught up with Olson at the 5-yard line. However CGD’s Garrett Seaba punched it in on the next play. Brallon Gomez’ extra point kick gave the Cowboys a 7-6 lead at the 2:22 mark of the first period.
ELC didn’t take long to answer. Although a holding penalty against the Midgets on the ensuing kickoff had them start at their 12-yard line, Schiltz connected with McMurran who broke a handful of tackles for a 66-yard gain. On the next play, a run by Jensen took the ball all the way to the 1-yard line, where McMurran punched the ball in. ELC failed again on its two-point conversion, but led 12-7.
When ELC got the ball back in the second quarter, the Midgets drove across midfield. Larson ran a route down the middle of the field and got behind the Cowboy defense. A perfect pass from Schiltz resulted in a 44-yard strike. That gave ELC an 18-7 lead with 7:31 remaining in the half.
CGD was able to come back again. On their next drive, the Cowboys converted a fourth-and-2 at midfield and then went to the air for a couple more first downs.
Facing third and 10 from the ELC 24, Gardner went to the air to 6-3 Jason Carpenter, who had a height advantage over ELC’s Alex Sheridan (5-6). Carpenter snagged the pass in the end zone. The extra point cut ELC’s lead to 18-14.
However, the Midgets weren’t done in the first half. With just over a minute remaining, ELC started at their 35-yard line. A 12-yard run by Schiltz was followed by a run by Jensen, who took the ball all the way to the 6-yard line. ELC eventually faced fourth and goal from the 11-yard line. Schiltz found Blake Ingvall on a slant route to give the Midgets a 24-14 lead at the break.
In the second half, ELC’s defense scored when Busch picked up a fumble and returned it 62 yards.
Busch also had a 4-yard touchdown run in the second half.
Schiltz and Larson connected for a second touchdown, this time for a 68-yard strike. Schiltz also had a 1-yard touchdown run. Brandon Flores converted all four extra-point attempts in the second half.
Larson led ELC’s receiving corps with six catches for 144 yards. McMurran caught one pass for 66 yards, Jensen had one catch for 42 yards, Ingvall had one catch for 11 yards and Logan Nissen caught one pass for eight yards.
On the ground, Busch had eight carries for 64 yards, Jensen had five carries for 61 yards, Schiltz had 10 carries for 49 yards, and McMurran had four catches for 32 yards.
Defensively, ELC had six sacks in the game—one each by Jensen, Busch, Alex Pena, Zander Snyder, Cade Crees and Griffin Hoyer.
Pena and Busch each finished with nine tackles, wile McMurran had six and Snyder had 5.5.
ELC (3-1 overall, 1-0 in district play) hosts top-ranked Southeast Valley for homecoming this Friday. The Jaguars are coming off a 44-22 victory over OABCIG in their district opener.