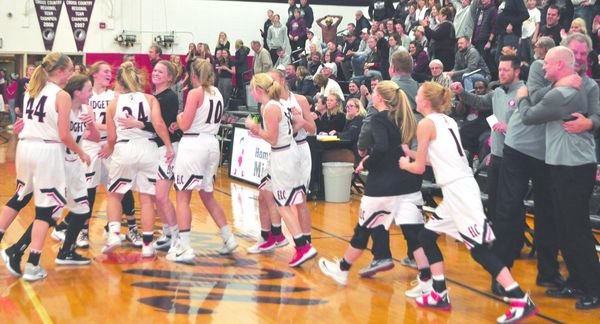 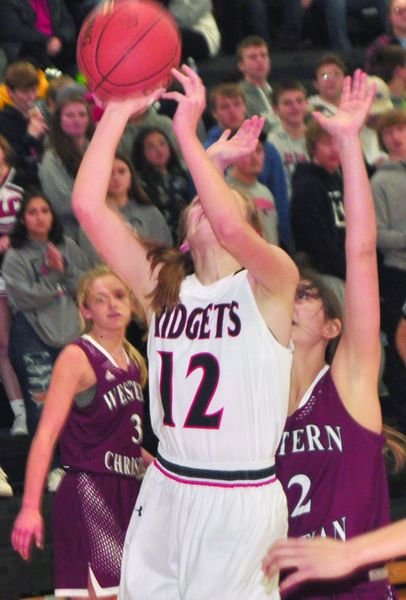 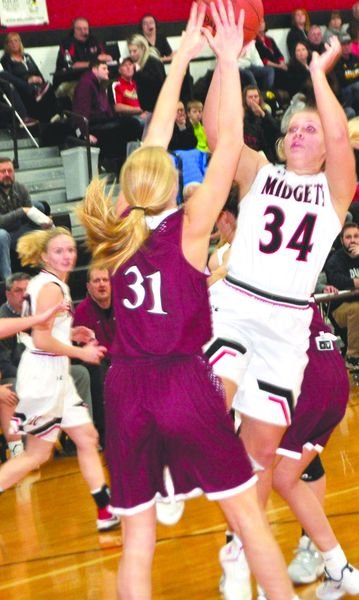 Estherville Lincoln Central withstood a fierce fourth-quarter rally by Western Christian in holding on for a 45-43 victory on Tuesday.

The Midgets led by 10, 33-23, entering the final frame when Western Christian's full-court pressure began paying dividends in the final minutes of the game. ELC still led by six, 45-39, with a minute to go after two free throws by Jordyn Stokes.

However, turnovers allowed Western Christian to cut the lead to two. The Wolfpack then had a chance to take the lead on a corner 3-pointer that was just off the mark.

A jump ball on the long rebound allowed Western Christian to keep the ball with 10 seconds left in the game. But after the Wolfpack in-bounded from the base line, the Midgets' defense, which was solid most of the night, came up with a steal and ELC was able to run off the clock.

"They're all seniors and extremely athletic," he said of the Wolfpack. "They just came off a volleyball championship. They game plan was to stay in front of them. I'm extremely pleased with our play off the bench after we got some foul trouble. Brie Christoffer, Adrienne Rosfjord, and Maggie White all stepped up. "This is a good way to start the Lakes (Conference) with a win."

The coach noted there are areas to work on.

"We had trouble taking care of the ball against their pressure," he said. "We had some poor execution with the time and the score, which we have not worked on much yet. Also rebounding is always a concern with our size difference."

Stokes, who finished with a game-high 17 points, started well with a pair of 3-pointers in a low-scoring first quarter, as ELC took an 8-6 lead."

ELC led by just three, 17-14, after starters Jaydan Nitchals and Jadynn Moore had both gone to the bench, when the Midgets put together a run to extend the lead.

Kaitlyn Tendal hit a 3-pointer and then hit a second after a steal by Christoffer on the defensive end. A floater by stokes extended ELC's lead to 25-14 before the Wolfpack came up with another basket, as the Midgets led 25-16 at the break.

Moore came back ready to play to start the third quarter. She posted up and hit a fall-away jumper over a Western Christian defender, and then took a charge on the defense. Martindale immediately set up a play for the senior, who knocked down a 3-pointer for ELC's biggest lead of the night, 30-16.

While Moore would pick up her fourth foul and Nitchals her third later in the quarter, ELC led by 10, 33-23, to start the final frame.

Stokes had five points and a pair of steals to go with her 19 points. Tendal finished with 12 points and a team-high eight rebounds and three steals. Moore had nine points while Nitchals had five and Rosfjord had two.