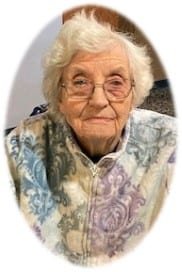 Emily Annie (Meyer) Sternborg was born on November 25, 1925, to Joseph and Annie (Engels) Meyer in Ellsworth, Minnesota. She died on March 28, 2021, at the Dougherty Hospice House in Sioux Falls, South Dakota, following a stroke.

Emily graduated from Ellsworth High School and attended college at the University of Dubuque, in Dubuque, Iowa. She received her teaching certificate from the Iowa State Teachers College in Cedar Falls and her four-year degree from MSU in Mankato, Minnesota.

Emily’s career of choice was teaching. She taught for a period of over 30 years in Monona, Iowa; Estherville Public Schools, and Lincoln Central School.

In 1951 she married Roy Sternborg at the Huntington Methodist Church which became her church home for over 50 years. The couple lived in Estherville in an upstairs apartment in “Grandma Hamilton’s” house when they were first married. Then they moved to the family farm in the mid-1950’s where they raised three children.

The couple moved to Estherville in 2011 and Roy passed away in 2014. Emily resided at Park View Terrace Apartments and Windsor Manor in Estherville.

Emily was very active in her church and was currently a member of the Dolliver United Methodist Church. She enjoyed gardening, cooking, word puzzles, and activities with her fellow residents at Windsor Manor.

Emily was preceded in death by her parents, five siblings (Earl, Edna, Ruby, Richard, and Alvin), and her husband.

A private family service will be held for Emily. In lieu of flowers, the family requests that memorials be made to the Dolliver United Methodist Church, Windsor Manor in Estherville, Good Samaritan Society in Estherville, or Pearl Valley Nursing Home in Estherville. Cards may be sent to the family c/o Mary Hensen at 1670 River Road, Windom, MN 56101.