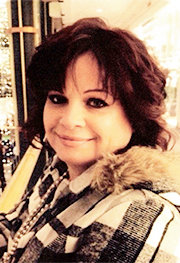 Funeral services for Joni Marie Kroenke, 59, will be held at 11 a.m., Saturday, Nov. 6, 2021, at Estherville Lutheran Church, Estherville, with Pastor Tim Johnson officiating. She died on Sunday, October 3, 2021, at Mercy Hospital in Minneapolis, Minn. Visitation will be held one hour prior to the service at the church.
Joni Marie (Sifrit) Kroenke the daughter of Laverne and Marion (Ternes) Sifrit was born November 18, 1961, in Estherville, Iowa.
She received her education and graduated from Estherville High School. She then attended nursing school at ILCC in Emmetsburg, Iowa.
On November 27, 1982, she was united in marriage to Tom Kroenke in Estherville. Right after Tom and Joni were married, Tom left for Mannheim, Germany, where he was stationed in the United States Army. Joni joined him shortly and they spent three years there, and that is where their first and only child (Keah) was born. When they returned, they lived in several different suburbs until they built their new home in Rogers, Minnesota.
Joni was a loving wife, mother, and grandmother. She loved her family and would do anything for them. She loved playing with her grandkids and enjoyed crossword puzzles and decorating their home. Joni loved flowers and always had beautiful flowers on the deck and in the home.
Joni had a big heart and it showed in how she took care of the residents in the nursing homes. She worked at several different nursing homes in the Minneapolis area. She was a very caring and compassionate nurse. The patients always came first with Joni. She mostly worked the evening shift and always worked more hours than her shift required. To relax when she got home, she would work crossword puzzles.
Left to cherish Joni’s memory are her husband, Tom; daughter, Keah Ombongi; grandchildren, Nicholas, Taylen, Okari and Moraa; siblings, Mark (Mary) Sifrit; Craig (Buffie) Sifrit; Julie (Michael) Stoecker; Kevin (Robin) Sifrit; Darcy (Barb) Sifrit; Bruce (Julie) Sifrit; Michele Limric; Eric Sifrit; mother-in-law, Marlys Kroenke; brother-in-law, Jeffrey (Kelly) Kroenke and their children, Brittney; Chelsea and her fiance, Ryan Ketelsen and their children, Leah and Christian.
She has been preceded in death by her parents; brother, David and father-in-law, Henry Kroenke.
Online condolences may be left for Joni’s family at HenryOlsonFuneral.com.