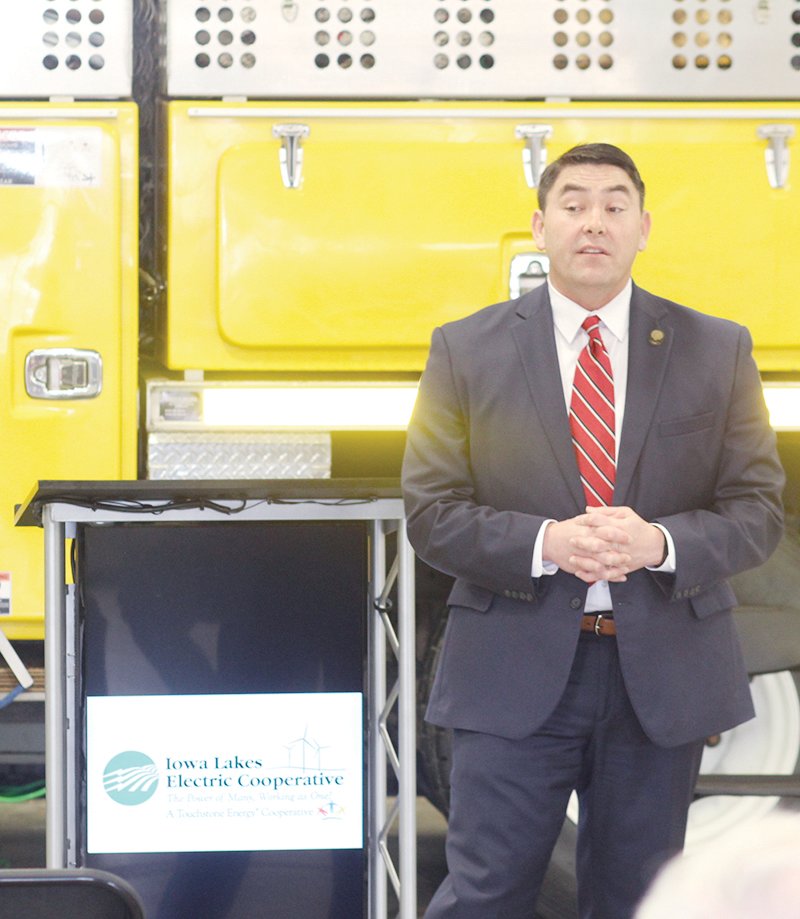 This file photo shows Rep. Henry Stone on a visit to Estherville in April. Stone was just elected to the State House in 2020 and now will likely serve a district that does not include Emmet or Palo Alto counties.
File Photo
Posted Monday, September 27, 2021 10:36 am
By Amy H. Peterson - Staff Writer

The 2020 Census made redrawing the boundaries for state senate and house and U.S. Congress districts necessary. Shifting population numbers meant some representatives no longer serve the same counties, as many rural counties have moved districts. These changes have happened due to the population changes in the census. Every ten years, a committee makes changes to the district maps. The proposed redistricting map was submitted Thursday morning by the Iowa Legislative Service. The district changes mean State Senator Dennis Guth, who farms in Klemme, and State Rep. Henry Stone, elected in 2020, and raising his family in Forest City, will no longer be part of the districts that include Emmet County.
Rep. Stone said in a phone call, “This is all new for me as this is my first term. I was surprised. When [former governor] Terry Branstad was campaigning for me, he said this district [which includes Branstad’s former home in Winnebago County] hasn’t changed much since I was a state representative.”
Stone also noted as an Air Force veteran that his new district number will be 51. “It will be pretty funny as an Air Force veteran to represent ‘Area 51,’ Stone said.
Counties in the proposed district 51 are currently served by Rep. Terry Baxter (R-Garner). The LSA said 40 current representatives are in districts that would have multiple incumbents. Twenty-four state senators would be placed in a district with another incumbent.
Emmet County remains in one district with Palo Alto and the northern two-thirds of Kossuth County for both the Iowa House and Senate.
Emmet and Palo Alto Counties remain well within the fourth U.S. congressional district. The fourth district increases from 39 to 44 of Iowa’s 99 counties, gaining Worth, Mitchell, Howard, Floyd and Chickasaw, but losing Franklin, Butler, Hardin, Grundy and Story on the eastern part of the district. In the Southwest, the fourth district gained Guthrie, Adair, Cass, Pottawattamie, Mills and Fremont counties as the third district shifted to the center of the state, taking some of the growing urban counties in south-central Iowa. Randy Feenstra of Hull is the current U.S. Representative for the fourth district, and Sioux County did not move to another congressional district.
Under the proposal, Emmet and Palo Alto counties would be part of Iowa House District 6, which includes the northern two-thirds of Kossuth County, winding around Algona but including Whittemore, all of Emmet and Palo Alto Counties, and an Eastern section of Dickinson County, including Superior, Terril, and Milford, and parts of the Lakes area, including Okoboji and Milford townships, in addition to Lloyd, Richland and Superior Townships. The western part of Dickinson County falls in District 5.
Senator Dennis Guth remarked, “These shifts happen every ten years. I will miss serving the people of [the fourth Iowa Senate district] area, but look forward to meeting the people of my new district, if that happens. We vote on this October 5, and if we don’t approve it, there’s another redrawing and it is put to another vote. If we can’t approve one, the Iowa Supreme Court decides how it’s drawn. I don’t think it will come to that.”
Each Iowa Senate district generally encompasses two House districts. The new Senate district 3 would include House District 6, which includes Emmet and Palo Alto Counties, and House District 5 – the rest of Dickinson County, Osceola and O’Brien Counties.
State Senator Zach Whiting (R-Spirit Lake), lives within the proposed new Iowa Senate district. Rep. Megan Jones (R-Spencer) currently serves Palo Alto County, but lives in Clay County. Rep. John Wills (R-Spirit Lake) also lives outside the proposed new House district border as his address of record is on the west side of West Lake Okoboji.
The current representatives will serve the current districts until the 2022 elections. The Legislative Services Agency will hold two more public hearings: today, September 21 and tomorrow, Sept. 22. Access is available through the Iowa Legislature’s website.