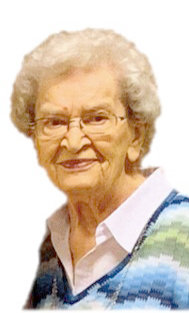 Funeral services for Marian Buthmann, 99, of Estherville, will be held at 2 p.m., Monday, March 2, 2020, at Immanuel Lutheran Church in Estherville with Pastor Thomas Marth officiating. Interment will be at East Side Cemetery, Estherville. She died on Thursday, February 27, 2020 at the Good Samaritan Society in Estherville.

Marian May Buthmann the daughter of William and Ida (Strampe) Lange was born May 18, 1920 in Paullina, Iowa.

Marian was confirmed on May 27, 1934, at Zion Lutheran Church in Paullina. She received her education and graduated from Paullina High School.

On Feb. 13, 1944, she was united in marriage to Donald Buthmann in Paullina, Iowa. The couple moved to Estherville in 1945. Marian worked at Fareway Grocery Store for 21 years, retiring in 1982. Marian enjoyed traveling, playing cards, quilting, reading and especially spending time with her family. Donald died in 2012.

She was an active member of Immanuel Lutheran Church in Estherville where she served on the Ladies Guild and the Lois Church Circle. She was also a member of the VFW Auxiliary.

In lieu of flowers the family prefers memorials.