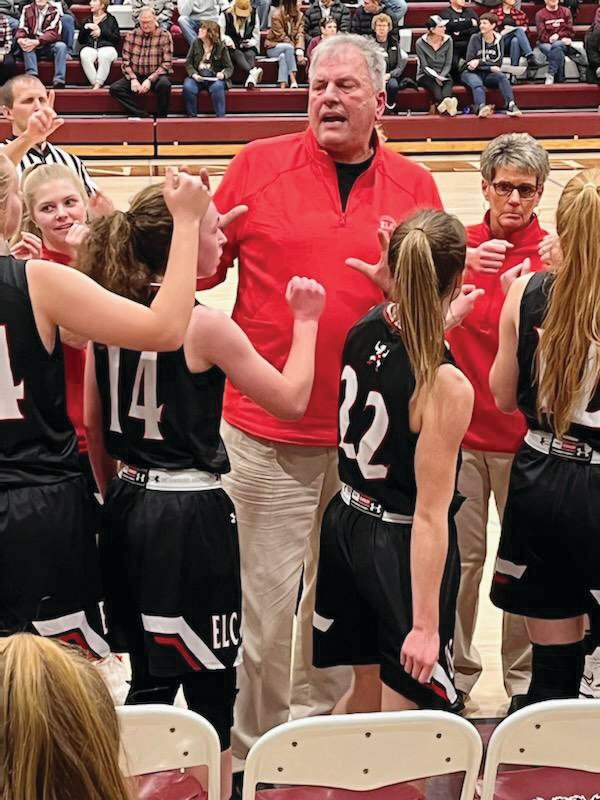 HULL — The Estherville Lincoln Central girls left no doubt that they would give their coach, Don Martindale, his 300th career girls’ basketball victory on Tuesday.

Senior Jaydan Nitchals hit her first two 3-point attempts to start the game and hit another in the first quarter as the Midgets raced out to a 20-4 lead. ELC, ranked fourth in Class 3A, expanded its lead throughout the night on the way to a 59-29 victory.

Martindale, who was a long-time coach at Spencer, now has 68 victories as the ELC girls head coach the past five years. He will be inducted into the Iowa Girls Coaches Association Hall of Fame during the 2022 Girls State Tournament.

“It’s been a blessing with all the players that have bought in to what we’re trying to do, the assistant coaches I’ve had and the parent support from the community,” said Martindale. “300 wins is a milestone and I appreciate everyone that’s been a part of it along the way.”

ELC’s success this season has come in forcing opponents to make turnovers. Unofficially, Western Christian had 18 turnovers in the first half as ELC led 36-17. The Wolfpack finished with 30 turnovers on the night.

Nitchals and Haylee Stokes led the Midgets’ effort with 21 points apiece. Nitchals had five of ELC’s six 3-pointers in the contest.

“When a player like her catches fire, you have to give her the ball,” said Martindale.

Meanwhile Stokes took her points where she could with drives to the basket and the free throw line, where she was 7-of-7.

“What do you do with a player like that?” said Martindale “You let her go with that basketball savvy. She can play up-tempo, the mid-range game—she’s turning into a special player.”

Jordyn Stokes and Jasey Anderson each chipped in five points while Rylee Yager had four and Kaitlyn Tendal had three.

ELC (13-2 overall, 5-0 in the Lakes Conference) is home today against Emmetsburg (8-6). ELC defeated the E’Hawks earlier this season, 61-25, on Dec. 21. ELC travels to Milford on Saturday to play the Okoboji Pioneers (7-6). The Midgets return to Lakes Conference play next Tuesday for their second meeting of the season against Cherokee (10-5). ELC defeated the Braves, 61-25, in their first meeting on Dec. 14.