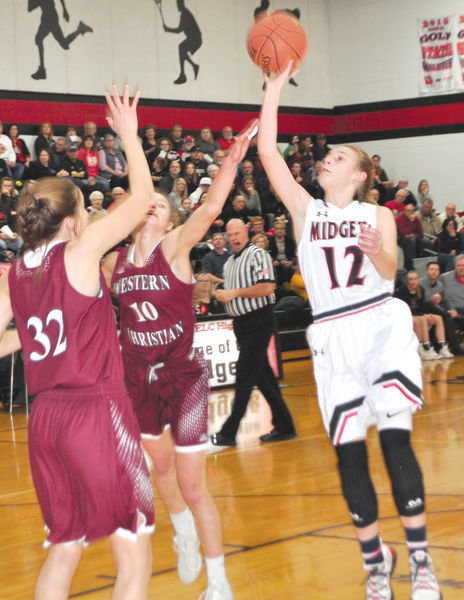 "Offensively we did some nice things tonight and attacked their 1-2-2 zone well," said ELC coach Don Martindale. "We made 15 3 pointers and I don't think we forced any of them."

"It's good to see Amara coming into her own," said Martindale.

Junior Adrienne Rosfjord started in placed of Jodryn Stokes, who was nursing a hamstring injury and had just returned to practice earlier last week.

Rosfjord responded with a season-high 11 points.

"Adrienne was in the flow and nothing she did was rushed-it was all in rhythm," said Martindale.

ELC led 25-15 after one quarter, but didn't let up the next two periods, scoring 26 points in each the second and third quarter while Storm Lake scored 15 over that span. The second quarter included an 18-0 run by the Midgets and Rosfjord scored nine of her 11 points in the period.

ELC led 51-23 at half-time and 77-30 entering the final frame with the 35-point running clock starting early in the third period after one of Tendal's treys.

Jaydan Nitchals picked up a couple early fouls, forcing Martindale to go to his bench with Maggie White. However, White also struggled with fouls, fouling out before the end of the game. Nitchals finished with eight points while White didn't get in the score book.

ELC (7-2 overall, 3-1 in the Lakes) is home Tuesday against Graettinger-Terril/Ruthven-Ayrshire.