Midgets take charge in the fourth 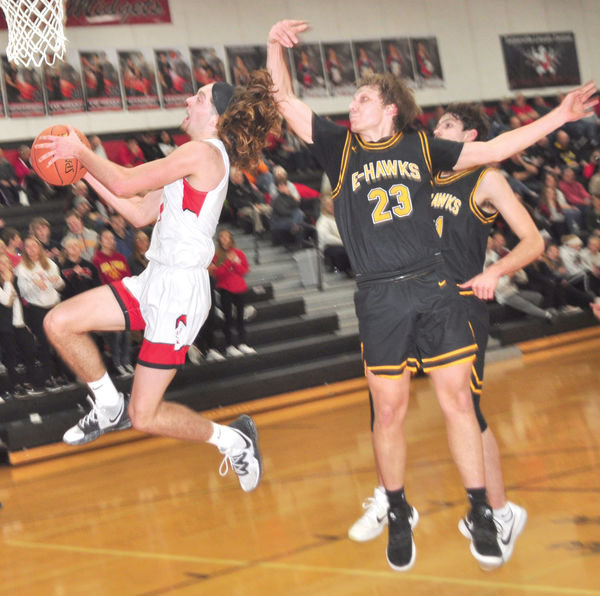 ELC’s Matt Christensen fools Emmetsburg defender Colby Weir (23) on taking the ball to the opposite side of the basket on this break-away layup in the fourth quarter last Thursday. Photo by David Swartz
Posted Monday, January 27, 2020 12:00 am

Estherville Lincoln Central led from start to finish, but couldn't put Emmetsburg away until the fourth quarter in a 64-52 win last Thursday.

The E'Hawks closed a double digit lead with a pair of 3-pointers in the fourth quarter that had the lead at just six, 53-47 with just over 4 minutes left in the game.

However, ELC scored the next eight points starting with two free throws by Tristan Howard, a basket by Adrian Vaughn and breakaway layups by both Matt Christensen and Jacob Jensen off E'Hawk turnovers to push the lead back to 61-47 with 2 minutes left in the game.

The E'Hawks made just two more baskets as the Midgets hung on for the win.

Both teams came out hot in the first quarter.

A Kevin Egeland 3 opened the game, but it was Isaac Sander who had the hot hand in the first half. The senior hit four treys in the opening period and Matt Christensen came up with a pair of key baskets inside, as ELC took a 26-20 lead in the first quarter.

It would take two quarters for both teams to double their point totals as the pace slowed down. However ELC pulled ahead to a 36-29 half-time lead.

The third quarter belonged to ELC's Octavious Piercy-Maze who scored nine of his 11 points in the period. He capped the period with a pair of free throws that gave ELC a 51-38 lead with 5.3 seconds remaining. But that was still time for Emmetsburg's Ben Dunlap to hit a 3-pointer at the buzzer to cut the deficit to 10, 51-41.

Dunlap led Emmetsburg with 26 points with most coming from the free throw line in the first half, where he was 13-of-14.