Moffitt to be inducted into Wrestling Hall of Fame 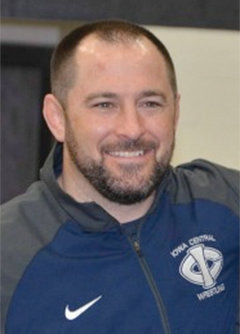 Moffitt will be honored in a ceremony in June.

Luke Moffitt wrestled for Estherville-Lincoln Central High School in Estherville, Iowa, winning an Iowa state high school championship in 1997. He won a national championship at 141 pounds for Iowa Central Community College before signing with the University of Iowa.

Wrestling for Jim Zalesky and Tom Brands, Moffitt was a two-year starter and won the Big Ten Tournament and was named Outstanding Wrestler in 2002.

Moffitt received his bachelor’s degree in elementary education and returned to Iowa Central as head coach. In his 18th season, he has a career record of 172-57 and has built the Tritons into a national power. Iowa Central has won seven national titles and has placed in the Top Eight at the NJCAA national tournament 17 consecutive seasons, including 12 top-three finishes. The Tritons also have won six national dual championships with 31 individual national champions, 49 national finalists and 102 All-Americans.

Watch for more information on Luke in an upcoming edition of the Estherville News.