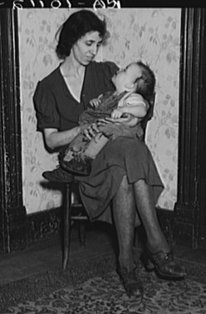 Wife of Homer Sharer and the baby, one of five children. Former tenant farmers and hired hands. They are now living on unemployment relief in Estherville, Iowa - Photograph by Lee Russell, part of the Farm Security Administration Collection
Posted Tuesday, May 25, 2021 4:24 pm

Emmet County lost 40 people to coronavirus since the first case was reported May 13, 2020. It may have accelerated Emmet County’s shift further into the unwanted statistic of more births than deaths, though the latest statewide statistics from the Iowa Department of Public Health counted the ratio from 2015-2019.

Complicating an effort to count Emmet County babies is the fact that none has been born at Avera Holy Family Hospital since it closed to births two years ago. Twenty-four birthing centers have closed in small and medium-sized towns, with the main issue cited as the inability to attract and retain staff for them. Highly qualified doctors certified in obstetrics tend to not wish to be on call 24/7 for every baby born. Even two OB doctors in a community could mean that one will have worked all day in clinic and all night in OB should one dare to be ill or take a vacation. In 2021, only 57 of Iowa’s 118 community hospitals has a birthing center, leaving many families to travel out of town to have their children. Many have chosen to simply relocate to towns and cities that have the facilities, as they also tend to have pediatricians and related services for young children. This, too, has led to population shrinking and the aging of smaller towns.

The statewide slide, however, began in 2007, before the country’s last big recession.

Researchers say some younger people might have delayed starting or expanding their families due to the pandemic, and may resume procreative activity as conditions improve. However, that wouldn’t support any dramatic baby boom that would suddenly push the birth rate up to 2007 levels. As with other states, Iowa’s most fertile year was at the peak of the baby boom, 1951, when 66,123 babies were born and 26,287 Iowans died.

A well-intentioned move, a public health effort to lower the teen birth rate, has had the unintentional effect of reducing births altogether.

The Pew Research Center says the nation’s birth rate peaked in 1957 when it topped 96 births for every 1,000 females aged 15 to 19. In Iowa, the number of babies born to teen mothers fell from 3,922 in 2000 to 1,489 in 2019, according to the Iowa Department of Health. Greater access to birth control combined with the decision to wait longer before becoming sexually active have contributed to the fall, which state economists say is on the whole a good thing as women who delay pregnancy into their 20s or beyond are more likely to finish high school, go to college, and develop professional skills.

In recent years, the only age group who has increased in birth rate is women in their 40s. Technology and medical advancements have made it both possible and safe for women to delay first pregnancy longer and have subsequent children later.

Economic researchers say it’s crucial for Iowa to attract more young adults and to retain the ones who grew up here, a major challenge for rural areas.