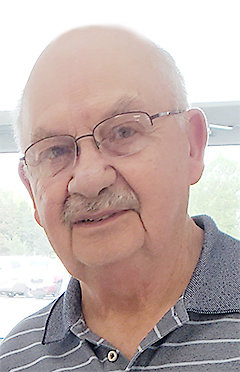 Fairmont, Minn. — Mass of Christian Burial for Raymond A. Rosa, age 79, of Fairmont, MN will be held at 10:30 AM on Thursday, October 21, 2021 at St. John Vianney Catholic Church in Fairmont. Full military honors will be provided outside the church following the service by the Lee C. Prentice American Legion Post #36 and Martin County Veterans of Foreign Wars Post #1222. Burial will be held at Calvary Cemetery in Fairmont. Visitation will be held 4:00 PM to 7:00 PM on Wednesday, October 20, 2021 at Lakeview Funeral Home in Fairmont. Raymond passed away surrounded by his family on Wednesday, October 13, 2021 at his home in Fairmont. The Lakeview Funeral Home in Fairmont is assisting the family with arrangements.
Raymond Albert Rosa was born on March 4, 1942, to William and Luella (Eby) Rosa in Jackson, MN. He attended school in Jackson, MN. Ray served in the United States Navy from August 29, 1960 until being honorably discharged on August 28, 1964.
On February 7, 1970, Ray was united in marriage to Dorothy Theesfeld at St. Patrick’s Catholic Church in Estherville, IA. After their marriage, Ray and Dorothy lived in LeClaire, IA and after moving to various places throughout the years they settled in Fairmont twenty years ago. Ray worked for Frontier Phone Company for many years and retired in 2007.
Ray was a member of St. John Vianney Catholic Church in Fairmont, Knights of Columbus and the VFW Post #3388 in Estherville, IA. When Ray wasn’t working on telephones, he loved to be outdoors fishing or gardening. Ray loved cheering on the Minnesota Vikings. His greatest enjoyment in life was spending time with his family, especially his grandchildren and great-grandchildren.
Those left to cherish his memory include his wife of fifty-one years, Dorothy Rosa of Fairmont, MN; sons, Joe (Angel) Rosa of Sauk Rapids, MN, Bill (Lynn) Rosa of Windom, MN and Jim (Stacey) Rosa of Clear Lake, MN; daughters, Katie (Jeremy) Kietzer of Fairmont and Lori (Craig) Tigges of Mt. Carmel, IA; fourteen grandchildren; twelve great-grandchildren and one on the way; brothers-in-law, John Ysker of Windom, MN, Don Theesfeld of Algona, IA and Gary Theesfeld of Luverne, MN; and nieces, nephews and other extended family.
He was preceded in death by his parents, William and Luella Rosa; parents-in-law, John and Dorothy Theesfeld; brother, Rudy Rosa; sister, Connie Ysker; sisters-in-law, Irma Rosa and Marlene Theesfeld.
www.lakeviewfuneralhome.net