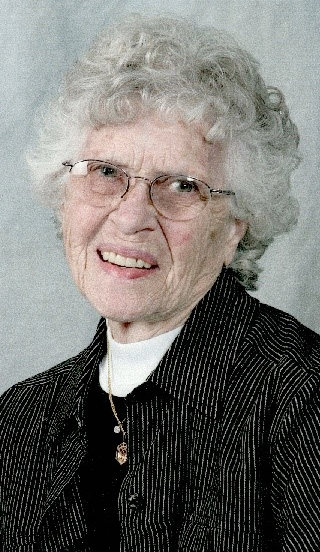 Ruby King McKee, was born April 8th, 1918 near Villisca in Montgomery County, IA. The daughter of Charles Jackson and Lena Mattie (Kendrick) King. Passing peacefully, March 2nd, 2021. at Longhouse-Northshire, in Spencer, IA, one month before her 3rd Centenarian Birthday. She grew up in the Guss area in Taylor County, graduating 1935 from Villisca High School with a teaching certificate. She taught country schools in Taylor and Adams county for 4 years.On Dec. 31, 1938 she was united in marriage to Manford McKee of Prescott, IA in Maryville, MO. They lived in the Prescott and Corning area before moving to Algona in 1958, and Estherville in 1959. Along with children Elaine and Charles, she joined the Methodist Church in Corning, May 11th, 1958. After moving to Estherville, she worked as a waitress at the Gardston Hotel, before starting to work for the City of Estherville in the Utility Department as a billing clerk, retiring with over 25 years, in 1989.As Manford had died in 1985, she moved to Spencer in 1991. She traveled with her neighbor, Dorothy Vodraska on many trips. They traveled to all the states and Canada, some more than once. Many scenic places, Switzerland (gondola), Austria, Germany, New Zealand, Australia, Hawaii (helicopter tour), Prince Edward Islands, home of An-nie Green Gables. She loved to read, walk, attend her yard, and flower gar-den and take care of her great grandchildren, who called her ‘Gramma Gramma’.After breaking her hip in 2015, she moved to St. Luke’s, Assisted Living; and, then to Longhouse-Northshire. She loved all the special attention from everyone there, and all the activities. She especially liked to walk., laugh and clap to the music, and Loved all the Hugs.We mourn her passing, but cherish her memory: daughter Elaine Frommie, her husband Vance, granddaughter Stacey Anderson and her children, Haley, Shelbey, and Kyley, from Spencer, IA. Grandson Joshua Frommie, wife Lisa and their children Alex and Maci, from Blue Earth, MN. Her son Charles, wife Judy, from Prescott, AZ. and their children, Liza and her husband Vince Cavigilla of Fredericksburg, VA., and Daniel, from Prescott Valley, AZ.Preceding her in death, were her husband Manford (Mac) 8-23-1985, her parents, Charley and Lena, her brothers, Ora and Virgil, and sister, Velda.Due to the COVID-19 pandemic there will be a private viewing at Warner Funeral Home with burial at Victoria Cemetery, Massena, IA, at a later time.