Shooting woes continue for ELC in loss to N-F 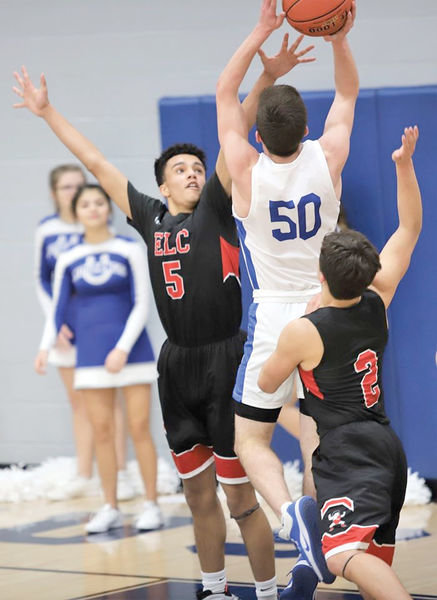 The Midgets put up 30 more shots than the Mustangs, but the hosts were more efficient and made three more field goals. ELC finished 20-of-57 compared to Newell-Fonda's 23-of-37. ELC was 7-of-22 from 3-point range while the Mustangs were 8-of-17. Newell-Fonda also made 12 more free throws, but a portion of that was ELC fouling out the end of the contest.

"We had a lot off good looks that just rimmed out," said ELC coach Nick Gruhlke.

ELC trailed 15-9 after one quarter and kept pace with the Mustangs in the second quarter, trailing 29-23 at the break. However, Newell-Fonda had retaken the momentum with a 3-pointer at the buzzer before the break.

The hosts kept the pressure on in the third quarter, pulling away to 54-36 advantage entering the final frame.

Adrian Vaughn led ELC with 11 points while Jacob Jensen had eight, Izaak Sander had seven, Blake Ingvall had six, Octavious Piercy-Maze had five, Kolin Richardson had four, Tristan Howard and Matt Christensen each had three and Weston Shasteen had two.

Aden Mahler led Newell-Fonda with 23 points and Trey Jungers had 22.

ELC (5-6 overall) is on the road against Western Christian on Tuesday.