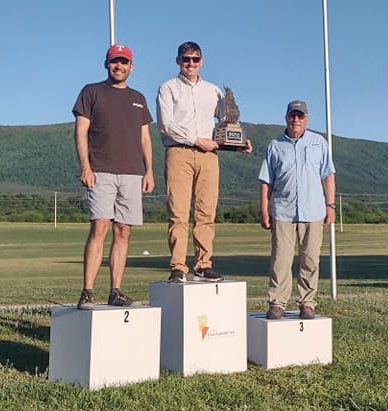 Tony was the pilot with the highest cumulative score over the course of the contest which ran from May 4-13 at the Chilhowee Gliderport in Benton, Tenn. Tony flew his Schempp-Hirth Standard Cirrus, a 15 meter wingspan sailplane, with the contest ID “K” against 20 competitors. The competition included one reigning World Champion, six current or former US team members and 3 National Record holders.

Tony has been flying sailplanes since 2004. His soaring experience includes earning a Diamond badge with a 750 kilometer distance diploma, holding one US National Record, and being named twice to the US Team in the 13.5 meter class: 2015 in Lithuania and 2017 in Hungary. He has previously won competition at the regional level but this is his first National title. Tony is the President of the Kansas Soaring Association which is based at Sunflower Aerodrome near Hutchinson, KS.

“Competition Soaring appeals to me because it is the best way to get a head to head comparison of how you are flying,” said Tony. “Normally when I’m at my home club I fly alone so I don’t get to see how much better I could’ve done. In competition I get to chase the elusive goal of perfection and making the fastest, most efficient possible flight. It’s a test not just of the physical skill and challenge of flying the sailplane for 4 or 5 hours but also the mental challenge of understanding the sky, the weather, and the theory to get the most out of it.”

The Soaring Society of America is the governing body of sailplane racing in the USA and describes the sport as follows:

“Racing sailplanes are the most efficient flying machines ever designed, converting 1 degree of altitude into 40 degrees of forward progress. Races can be a 100 or even over 450-mile-long tasks with up to 60 sailplanes participating. Sailplane racing is a competitive sport and without a power source, pilots must find the best lift sources and optimize cruise speeds for lift conditions. Many races are won or lost during the last 30-mile sprint to the finish line, where pilots use experience, glide-slope computers, and a bit of luck to convert altitude into an optimal ‘final-glide’ velocity.”