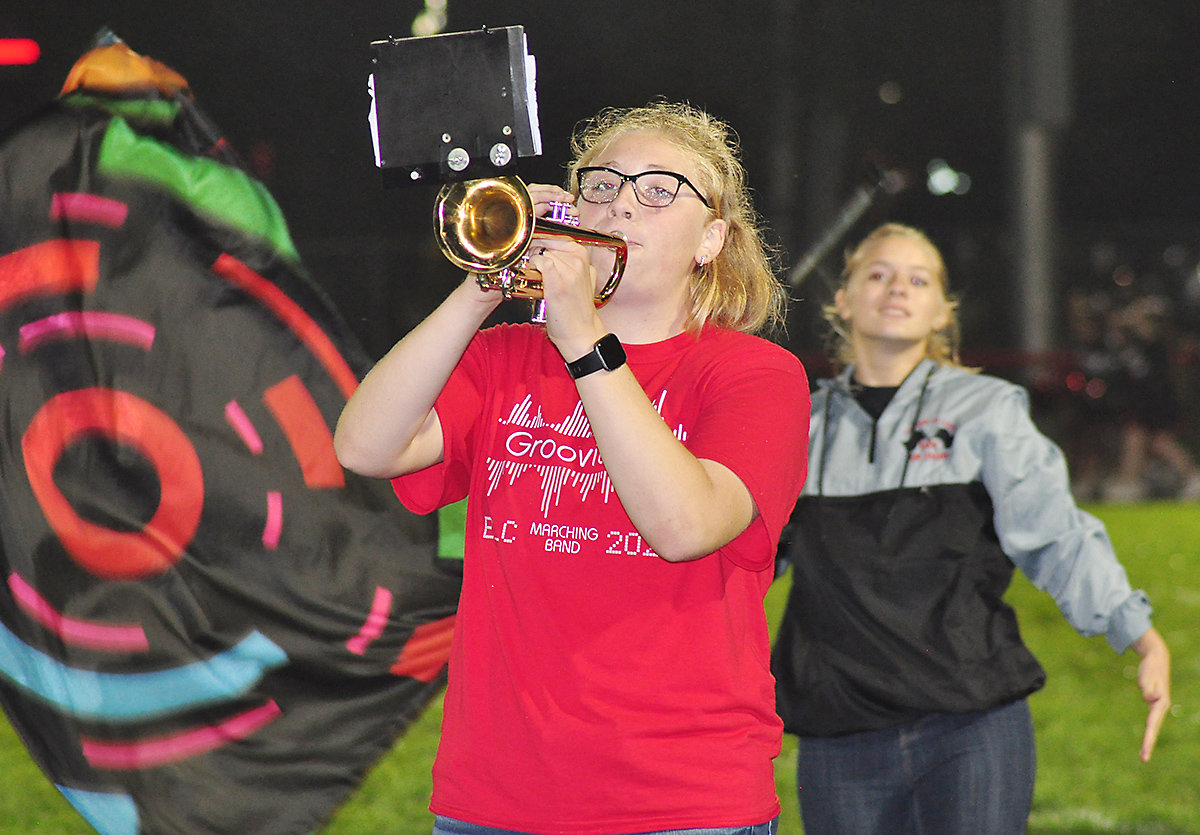 Estherville Lincoln Central fans can support the 2021 Marching Band at 7 p.m., today, Sept. 16 at Hoyt Luithly Field, the school’s home stadium.The event is a fundraiser for the band, as a freewill donation will be collected to help offset costs spent on props and other visual aids this season.
ELC Band Director Laura Giebler said this year’s show is entitled “Groovitude” and is original music composed by Randall Standridge.
“It has a 60’s/70’s kind of feel to it and is something that I think our audiences will really enjoy,” said Giebler.
Craig Began is the Assistant Marching Band Director. Betty Lou Jones is the Color Guard Instructor. Hadley Madsen is the Drum Major and Gracen Love and Abby Sander are the Color Guard Captains.
There are three parts to the show.
Part one will feature a Color Guard solo by Abby Sander and a trumpet solo by Shelby Brosh.
Part two will feature a Color Guard duet by Gracen Love and Abby Sander. It will also feature a trumpet duet by Emma Harvego and Lilli Nitchals.
Part three will feature a Color Guard Solo by Gracen Love and an alto sax solo by Grace Lutat.
The third part will also have a percussion feature where some of the percussionists will play on trash cans.
“I’m also excited to be working with the Art Club led by Nick Rice,” said Giebler. “This year our props have all been designed by ELC Art Students and will require volunteers to help us get them on and off the field for performances.”
The ELC Marching Band has the following upcoming competitions.
n Sept. 25 - North Central Iowa Marching Band Invitational in Fort Dodge. “Here we will receive a clinic in the early afternoon with some of the judges and will compete at 5:45 p.m. that evening at Dodger Stadium,” said Giebler.
n Oct. 2 - Algona Band Days. ELC will perform at 8:15 p.m. at the Algona High School Football Stadium.
n Oct. 9 - State Marching Festival in Fort Dodge
“Some of the challenges that come with this show are making sure that the front line musicians are listening back very carefully to the band and field percussion,” said Giebler. “We have been working hard to play our music with accurate articulations so that our tempos don’t drag and the show doesn’t lose its groove.
“I would also have to say that another challenge is the number of students we have participating this year, where it is their first year in marching band. With that being said, there has to be a strong focus on basic fundamental marching skills. It is a very young band, but I’m very happy with the enthusiasm and dedication they are showing to get this production on the field. I’m excited to see these young musicians grow over the next few years.”
Giebler said many hours are put into a marching band production.
“We rehearse every weekday from 7-9 a.m. and there will be a two-hour rehearsal before we leave for our performance at Algona Band Days,” she said. “This doesn’t include the hours that were put in back in July and August before school started by most of the band and color guard students.”
This year’s band has 56 members with the following breakdown—one drum major, 36 winds, 11 percussion and eight Color Guard
“Musically, this show is quite enjoyable,” said Andrew Bethune, a sophomore baritone player. “As the name implies, this show is going to be one groovy show. The road to get everything down sometimes continues to be rough, but we have faced bigger challenges in the past. All I can say is that this show should and will blow everyone away.”
“Marching band is fun but a lot of hard work,” said Austin Lavender, a freshman flute player.
“Everyone gets the chance to be involved in the marching band,” said Shelby Brosh, a sophomore trumpet player. “Every part is important, in order for everything to run smoothly. Marching band takes lots of hard work; sectionals in the summer, band lessons, and early morning practices. The competitions are so much fun, too. We love to get dressed up and perform for the community and school. It is something that I think everyone needs to see at some point. If you haven’t watched a performance, you should definitely come and see what we are all about. I have been part of the marching band since 7th grade, and it is one of the best parts of being in the band.”