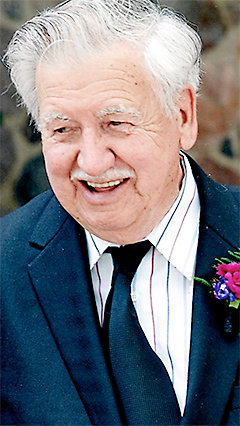 Funeral services for Sylvan Martin Lemke, 94, of Armstrong, will be held at 10:30 a.m., Friday, Oct. 22, 2021, at Nazareth Lutheran Church in Armstrong with Pastor Kim Campbell officiating. Interment will be at Armstrong Grove Cemetery, Armstrong with military rites by Weiby-Johnson VFW post 5232 of Armstrong. He passed away on Oct. 17, 2021, at Valley Vue Care Center in Armstrong, Iowa at the age of 94 years.
Visitation will be from 5-7 p.m., Thursday, Oct. 21 at the church in Armstrong.
Sylvan Martin Lemke, was born on September 15, 1927 in Wilbert, Minnesota, to Otto and Elizabeth (Wessel) Lemke.
Sylvan attended school in Wilbert Township and later at Fairmont High School. At age 17, he enlisted in the United States Navy to join his brothers in WWII. During his time in the Navy, he was trained to be an electrician and served on the USS De Haven Destroyer Ship. When he was honorably discharged, he returned to Minnesota and worked as an electrician. While employed in Fairmont, he met Dolores Lubenow. The couple was wed on November 10, 1951, at St. Peter’s Lutheran Church in Ceylon, Minnesota. They made their home in Fairmont, before moving to Ceylon and ultimately in 1961 they moved to Armstrong. There he started and ran Lemke Electric for many years. He then was the full time electrician for Art’s Way. Sylvan worked in maintenance at Armstrong Rim and Wheel for many years, fixing anything that needed to be fixed, retiring from there in 1997. Sylvan couldn’t be held down and began driving for his son’s roofing crew, earning the nickname Pops from them. Dolores passed away on April 27, 2017.
Sylvan was a member of Nazareth Lutheran Church and the Weiby-Johnson VFW in Armstrong. He enjoyed spending time with his family and volunteering for many of his children’s activities; Cub Scout Den Leader, coach for Little League, and building a soap box derby car were some of the most memorable times. In his younger years, he also enjoyed bowling, woodworking, building things, and fixing anything that needed it. Sylvan loved a day-out fishing with his boys or grandchildren, or a day-in putting together jigsaw puzzles. Every fall he enjoyed taking vacation, traveling all around the United States over the years. Heading to a restaurant for coffee or dinner with Craig was what brought him enjoyment in his later years.
Sylvan is survived by his children Craig Lemke of Armstrong, Vicki (Galen) Peta of Gruver, Mark (Betty) Lemke of Spirit Lake, Lee Lemke of Swea City and Scott (Jody) Lemke of Spirit Lake; 9 grandchildren; and 12 great-grandchildren. He is also survived by his brother Reinhold (Lorraine) Lemke of Northfield, MN, brother-in-law John Robichaud of White River Junction, VT, sisters-in-law Maryl Lemke and Betty Lemke of Fairmont, MN. He is also survived by Dolores’ siblings, Wayne (Shirley) Lubenow of Armstrong and Marilyn (Don) Stelter of Ceylon.
Sylvan is preceded in death by his parents, his siblings Alfred (Margaret) Lemke, Victor Lemke, Emil Lemke, Irene Robichaud, Marcella (Hugh) Nicolson, Hubert (Shirley) Lemke, and Esther (Bill) Baxter, and sister-in-law Charlene Lubenow.
Online condolences may be left for the family at www.henryolsonfuneral.com
Henry-Olson Funeral Home of Armstrong, Iowa is assisting the family with arrangements.