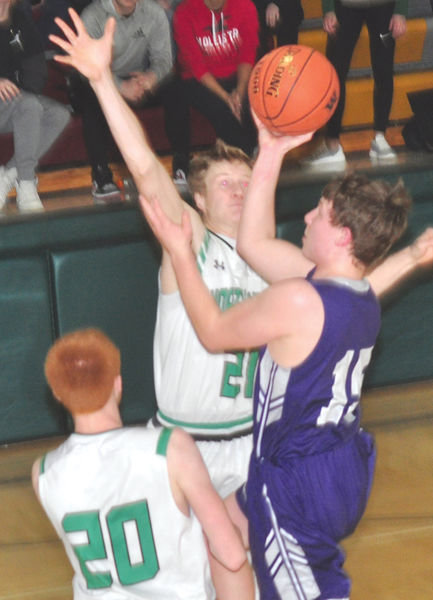 While North Union’s Brendan Anderson (21) denied GT/RA’s Blake Rosacker on this shot, the Titans left Armstrong with a victory on Tuesday. Photo by David Swartz
Posted Thursday, January 16, 2020 12:00 am

ARMSTRONG - Graettinger-Terril/Ruthven-Ayrshire built an early lead against host North Union, leading 15-4 after one quarter and 26-10 after half-time. The Warriors' offense finally jumpstarted in the second half, but the Titans held on for a 48-38 victory.

GT/RA led from start to finish. The Titans led 7-4 after two free throws from North Union's Gage Madden, but then Drew Schnell came off the Titans' bench to hit two 3-pointers from the left corner as part of an 8-0 run to end the opening frame.

Both teams' offenses struggled in the second quarter with the Titans' Kadin Norris making the only basket over the first 4 1/2 minutes before North Union's Noah Morphew connected on a 3-pointer.

The lids came off the baskets in the third quarter with North Union cutting the deficit to 11, 27-16, after 3-pointers by Morphew and Braden Pierce.

The teams played mostly even the rest of the period with GT/RA taking a 42-26 lead into the final frame. North Union just couldn't make up the difference in the fourth quarter.

Max Hough had a team-high seven assists while Norris, Blake Rosacker and Schnell each had four rebounds.

Robert Ortman led North Union with 10 points while Morphew finished with nine, Parker Eichenberger had six, Brendan Anderson had three, Gage Madden, Aidan Fries and Avery Krantz each had two and Jay Heinen had one.

The Warriors shot 31.9 percent (15-of-47) from the field. Morphew had six rebounds and Ortman and Anderson each had four steals.

GT/RA (4-7 overall) is at Pocahontas on Friday.

On Monday, Graettinger-Terril/Ruthven-Ayrshire lost 71-44 to Sioux Central. The Rebels jumped out to a 21-9 first-quarter lead and led 34-21 at halftime and 45-27 after three quarters.