Too much to overcome 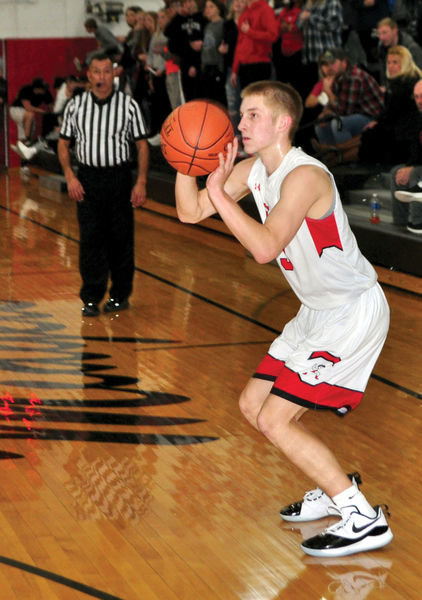 ELC’s Izaak Sander hit four 3-pointers in a 26-point effort against Storm Lake on Friday.The senior is averaging over 11 points per game this season. File photo
Posted Wednesday, January 8, 2020 12:00 am

STORM LAKE - Despite a career high 26 points from senior Izaak Sander, Estherville Lincoln Central's rally from a 16-point deficit in the second half, came up short, as the Midgets lost 80-75 to Storm Lake on Friday.

Sander scored 19 of those points in the second half, with most coming in the fourth quarter.

"Izaak was great and also did a great job of finishing at the hoop," said ELC coach Nick Gruhlke.

ELC started well against the hosts despite a hot start by Storm Lake's Mark Eddie, who made his first 3-point attempts. However, the Tornadoes led just 9-8 at that point.

In a seesaw first quarter, Adrian Vaughn, Sander, and Tristan Howard all hit 3-pointers and ELC had its biggest lead after a layup by Sander made it 20-16. However, the Tornadoes hit a 3-pointer and ELC's lead was just one, 20-19.

The Tornadoes scored the first five points of the second quarter and the battle for ELC was on to keep the game close to the Tornadoes, who led by as many as seven in the period. ELC cut the lead to two, 34-32, on a basket by Vaughn, but the Tornadoes led 38-34 at the break.

ELC's offense struggled in the third quarter while Storm Lake stretched its lead to 55-44 to start the final frame. Storm Lake continued to pull away, leading 66-50 when ELC began its comeback. It started with a three-point play by Matt Christensen. ELC began fouling the Tornadoes who missed some free throw to open the door for the Midgets.

ELC cut the deficit to four on a 3-pointer by Jacob Jensen, 76-72, with 19 seconds left in the game, but the Tornadoes made their final four free throws. AA 3-pointer by Howard at the buzzer made the final difference of five points.

"The effort was there, we just got too deep of a hole," said Gruhlke. "We executed our end game well."

Vaughn finished with 18 points while Octavious Piercy-Maze chipped in 11.

"Adrian can give us 18 most every night," said Gruhlke. "We just need to find a couple ways to get him better looks. Octavious was impressive on the boards tonight."

Piercy-Maze and Matt Christensen each pulled down eight rebounds.

Christensen finished with seven points, Howard had six, Jensen had five and Kevin Egeland had two.

"Matt rebounded well, but he got in some foul trouble," said Gruhlke. "We also need to get him the ball more often."

Piercy-Maze and Sander each had three assists while Vaughn had three steals.

Eddie led Storm Lake with 19 points while Jesus Soto had 13 and Sam Slight had 12.

"We rebounded well the first half, but against the zone, we let Eddie get hot."

ELC (3-4 overall, 0-4 in the Lakes) opens a busy non-conference week with a boys-only game at home against Pocahontas today and home against Graettinger-Terril/Ruthven-Ayrshire on Tuesday.