Warriors pull away for win 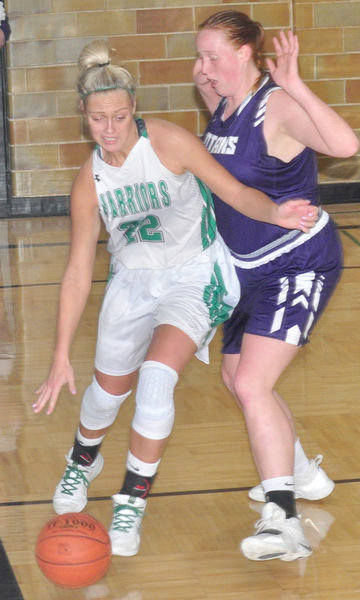 ARMSTRONG - After a seesaw battle for three quarters, North Union pulled away in the final frame to defeat Graettinger-Terril/Ruthven-Ayrshire, 43-34, on Tuesday.

After the Titans led 8-7 after one quarter, the second quarter featured seven lead changes and two ties with the Warriors out front 19-17 at the break.

GT/RA senior Madison Hough opened the third quarter with a 3-pointer, but the Warriors scored the next five points including a trey by Vanessa Von Bank for the biggest lead to that point, 24-20.

However Hough, who finished with 19 points, hit consecutive 3-pointers to give the lead back to the Titans, 26-24.

The Warriors' star, Chloe Lofstrom, immediately tied the game with a basket underneath the basket. Then teammate Brooklyn Prochniak sandwiched a pair of 3-pointers around a basket by the Titans' Kenzie Hoffman, as North Union led 32-28.

However, Hough had the last word of the quarter with her fifth 3-pointer of the game.

The final frame saw Olivia Von Bank hitting a jumper and a 3-pointer from Cassie Beadle to push the lead to 37-31. North Union led 39-31 when GTRA's Kenzie Hoffman hit a 3-pointer with 55 seconds remaining, but the Warriors made enough free throws to seal the victory.

Lofstrom finished with a game-high 21 points and 18 rebounds for her fourth straight double-double. She also had three blocked shots. Prochniak had six points while Beadle and Vanessa Von Bank each had three and Olivia Von Bank, Hope Steinberger, Emily Meyer, May Laverty and Sam Nielsen each had two points.

For the Titans, Hoffman had five points and Emma Baak, Mercedes DePyper, Kate Sorenson, Lauren Josephson, and Ally Hanson each had two points. Josephson led the team in rebounds with eight and Hoffman had four assists.

GT/RA (3-9 overall) is at Pocahontas on Friday.

Hough shot 12-of-123 from the field, including 4-of-10 from 3-point range. She also had four assists. Kate Sorenson chipped in 12 points on 5-of-5 shooting and also made both her free throws. Kenzie Hoffman had three Points and Ally Hanson had two. Lauren Josephson had five rebounds and three assists.